Appearing as the nephew of Shri Rupa and Sanatana Goswamis, Shri Jiva Goswami displayed all the charming features of a mahapurusa (divine person). He had lotus eyes, a high nose and forehead, broad chest, long arms, and a radiant golden body.
In his boyhood he made a Deity of Krishna-Balarama. Expressing his pure devotion, he would often cry while worshiping Them. After offering clothes, chandana, flowers, ornaments, and tasty sweets to Krishna-Balarama he would take some and give Maha-Prasadam to his playmates. From the beginning Jiva showed his kindness to other jivas (living entities). Jiva was so much attached to Krishna-Balarama that at bed time he would embrace his Deities and fall asleep. His parents thought he was only playing. But the villagers rejoiced to see Jiva’s love for Krishna-Balarama.
In school he quickly mastered Sanskrit grammar, poetry, logic, philosophy. Shrimad Bhagavatam gave life to his life. Krishna-katha filled him with happiness. No one dared to speak to him about anything but Krishna. He toured Navadwipa-dhama with Shri Nityananda Prabhu, studied Sanskrit in Benares, and then resided in Vrindavana. After humbly serving Shri Rupa Goswami by washing his feet, preparing his manuscripts, and editing his books he received diksha.
Once the aging Vaishnava, Vallabhacharya, gave critical advice to Shri Rupa Goswami on his writing. Although much younger than the venerable Vallabha, Shri Jiva brazenly spoke in defense of his guru. Shri Rupa Goswami scolded Shri Jiva telling him to leave Vrindavana. Living in an abandoned crocodile hole in Nanda Ghat (45 minutes from Shri Rupa’s bhajana kutir) , Shri Jiva Goswami began fasting. He subsisted on wheat flour, which he begged, mixed with Yamuna water. Seeing his strict self-denial, Sanatana Goswami brought him back to the service of Shri Rupa Goswami.

[To know more about him, visit – http://gaudiyahistory.com/sri-jiva-goswami/] 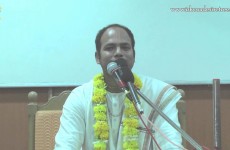 HIV, AIDS & All Other Problems Are There Because of Our Own Selfishness by Kadamba Kanana Swami

Devotees left with nothing are right with Krishna (Gita Daily)