Purport:
In Bhagavad-gita Krsna says that He is pranavah sarva-vedesu, the syllable om in the Vedic mantras. In transcendental knowledge, the Lord is addressed as pranava, omkara, which is a symbolic representation of the Lord in sound. Om namo bhagavate vasudevaya. Vasudeva, who is an expansion of Narayana, expands Himself as Pradyumna, Aniruddha and Sankarsana. From Sankarsana comes a second Narayana expansion, and from this Narayana come further expansions of Vasudeva, Pradyumna, Sankarsana and Aniruddha. The Sankarsana in this group is the original cause of the three purusas, namely Karanodakasayi Visnu, Garbhodakasayi Visnu and Ksirodakasayi Visnu. Ksirodakasayi Visnu is situated in every universe in a special planet called Svetadvipa. This is confirmed in the Brahma-samhita: andantara-stha. The word anda means this universe. Within this universe is a planet called Svetadvipa, where Ksirodakasayi Visnu is situated. From Him come all the incarnations within this universe.

As confirmed in the Brahma-samhita, all these forms of the Supreme Personality of Godhead are advaita, nondifferent, and they are also acyuta, infallible; they do not fall down like the conditioned souls. The ordinary living entity is prone to falling into the clutches of maya, but the Supreme Lord in His different incarnations and forms is acyuta, infallible. Therefore His body is different from the material body possessed by the conditioned soul.

The word matra is explained in the Medini dictionary as follows: matra karna-vibhusayam vitte mane paricchade. The word matra, in its different imports, is used to indicate the decoration of the ear, possession, respect, and the possession of a covering. As stated in Bhagavad-gita (2.14):

“O son of Kunti, the nonpermanent appearance of happiness and distress, and their disappearance in due course, are like the appearance and disappearance of winter and summer seasons. They arise from sense perception, O scion of Bharata, and one must learn to tolerate them without being disturbed.” In the conditioned state of life, the body is used as our dress, and as one needs different dresses during the summer and winter, we conditioned souls are changing bodies according to our desires. However, because the body of the Supreme Lord is full of knowledge, it needs no covering. The idea that Krsna’s body is like ours — in other words, that His body and soul are different — is a misunderstanding. There are no such differences for Krsna, because His body is full of knowledge. Here we receive material bodies because of a lack of knowledge, but because Krsna, Vasudeva, is full of knowledge, there is no difference between His body and His soul. Krsna remembers what He said forty million years ago to the sun-god, but an ordinary being cannot remember what he said the day before yesterday. This is the difference between Krsna’s body and our body. Therefore the Lord is addressed as vijñana-matraya paramananda-murtaye.

Because the Lord’s body is full of knowledge, He always enjoys transcendental bliss. Indeed, His very form is paramananda. This is confirmed in the Vedanta-sutra: anandamayo ’bhyasat. By nature the Lord is anandamaya. Whenever we see Krsna, He is always full of ananda in all circumstances. No one can make Him morose. Atmaramaya: He does not need to search for external enjoyment, because He is self-sufficient. Santaya: He has no anxiety. One who has to seek pleasure from other sources is always full of anxiety. Karmis, jñanis and yogis are full of anxiety because they want something, but a devotee does not want anything; he is simply satisfied in the service of the Lord, who is fully blissful.

Nivrtta-dvaita-drstaye: in our conditioned life our bodies have different parts, but although Krsna apparently has different bodily parts, no part of His body is different from any other part. Krsna can see with His eyes, and Krsna can see without His eyes. Therefore in the Svetasvatara Upanisad it is said, pasyaty acaksuh. He can see with His hands and legs. He does not need a particular bodily part to perform a particular action. Angani yasya sakalendriya-vrttimanti: He can do anything He desires with any part of His body, and therefore He is called almighty. Why I would never leave ISKCON by Murali Krishna Swami 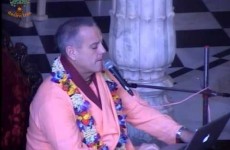 How to be happy by Murali Krishna Swami 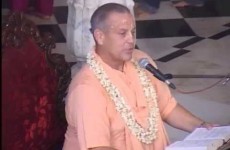 How I Came to Krishna Consciousness by Murali Krishna Swami 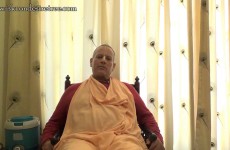 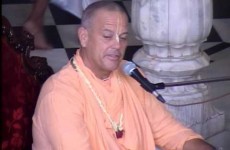 Challenging situations and how to face them by Murali Krishna Swami 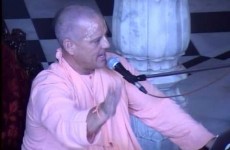 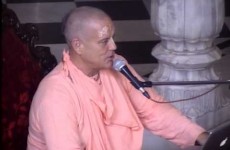 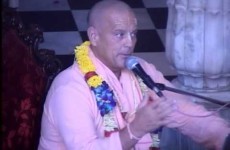 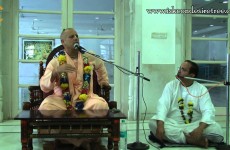 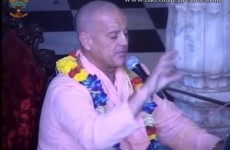