Translation by His Divine Grace A. C. Bhaktivedanta Swami Srila Prabhupada:
Sri Sukadeva Gosvami continued: Narada, having become the spiritual master of Citraketu, instructed him fully in this prayer because Citraketu was fully surrendered. O King Pariksit, Narada then left with the great sage Angira for the topmost planet, known as Brahmaloka.

Purport by His Divine Grace A. C. Bhaktivedanta Swami Srila Prabhupada:
When Angira had first come to visit King Citraketu, he did not bring Narada with him. However, after the death of Citraketu’s son, Angira brought Narada to instruct King Citraketu about bhakti-yoga. The difference was that in the beginning Citraketu was not in a temperament of renunciation, but after the death of his son, when he was overwhelmed by his great plight, he was awakened to the platform of renunciation by instructions regarding the falsity of this material world and material possessions. It is only at this stage that bhakti-yoga can be instructed. As long as one is attached to material enjoyment, bhakti-yoga cannot be understood. This is confirmed in Bhagavad-gita (2.44):

“In the minds of those who are too attached to sense enjoyment and material opulence, and who are bewildered by such things, the resolute determination of devotional service to the Supreme Lord does not take place.” As long as one is very much attached to material enjoyment, one cannot concentrate his mind on the subject matter of devotional service.
The Krsna consciousness movement is progressing successfully in the Western countries at the present moment because the youth in the West have reached the stage of vairagya, or renunciation. They are practically disgusted with material pleasure from material sources, and this has resulted in a population of hippies throughout the Western countries. Now if these young people are instructed about bhakti-yoga, Krsna consciousness, the instructions will certainly be effective.
As soon as Citraketu understood the philosophy of vairagya-vidya, the knowledge of renunciation, he could understand the process of bhakti-yoga. In this regard Srila Sarvabhauma Bhattacarya has said, vairagya-vidya-nija-bhakti-yoga. Vairagya-vidya and bhakti-yoga are parallel lines. One is essential for understanding the other. It is also said, bhaktih paresanubhavo viraktir anyatra ca (Bhag. 11.2.42). Advancement in devotional service, or Krsna consciousness, is characterized by increasing renunciation of material enjoyment. Narada Muni is the father of devotional service, and therefore, just to bestow causeless mercy upon King Citraketu, Angira brought Narada Muni to instruct the King. These instructions were extremely effective. Anyone who follows in the footsteps of Narada Muni is certainly a pure devotee.

[To hear more on this verse, visit – http://www.srimadbhagavatamclass.com/srimad-bhagavatam-canto-06-chapter-16-text-26/] 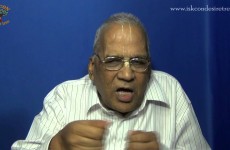 Vaastavik Aatankvaad (The other face of terrorism), Mahaprabhu Prabhu 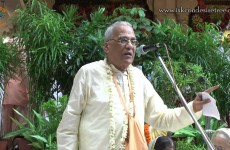 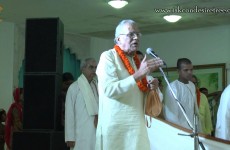 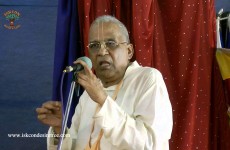 Gita 03.25 – The detached and the attached differ not in action but in intention

Bhagavatam-daily 117 – Canto-11, Chapter-08, Text-33 – Contemplate the body’s nature to get a illusion-countering cerebra

Scripture doesn’t take away our freedom of choice, but gives us choice of another.(Gita Daily)